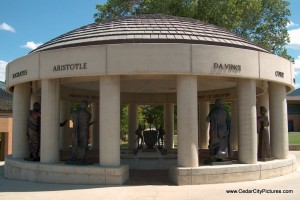 The Centurium was dedicated May 2, 1997 by George Herbert Walker Bush. The sculptor was Jerry Anderson. It contains many bronze statues including Aristotle, Curie, Da Vinci, Einstein, Galileo, Jefferson, Mill, Newton, Plato, Shakespeare, Socrates and Stael. It is next to the Centrum. Dr. Eugene T. Woolf assisted in the selection of the twelve historical figures from Western civilization represented in The Centurium.