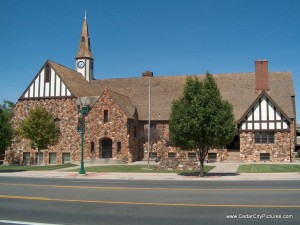 The old Rock Church holds many memories and interesting stories. It also houses some of the area’s greatest workmanship and lessons of hard work and perseverance.

The construction of LDS buildings in Cedar City was done on the northeast block of Main Street and Center Street. This entire section was owned by the LDS church and it was there that they built the tabernacle, which was torn down in 1932, a ward house and tithing offices. The Rock Church is all that remains of the magnificent block. It was built in 1931.

The construction of the Rock Church was and still is unique to this area and to the LDS church. It is the only chapel that was built entirely by church members. It was also built exclusively from area materials, which were not easy to get. The beautiful wood benches, tables, stair railings and doors were made from local Juniper trees. The saints cut the trees in the winter time so that the sap content would be lower.

“They glued them and smashed them,” Weaver said, as he pointed out the layers of wood in the pews. The iron light fixtures, which are still the original sets, were made from the iron that was mined in Iron County. The beautiful rock on the outside of the church was hauled in from southern Utah, as far south as Jacob’s Lake in Arizona, and as far west as Pioche and Penaca, Nevada. Many of these stones were not just simple stones, either. Silver, which looks blue in its natural state, and copper, which is green, are both on the building.

Master stone masons from Germany laid everything out on the ground to pattern out the design before laying it on the front of the church. As you look above the front door at the archway, you will notice a center piece, which is called the keystone, and how these men placed the stones to match on either side as they went out. Even the stones all across the front are matched mirror image from the center.

As construction began, estimates for the cost of the building were in the neighborhood of $60,000. Even with the vast amount of donated labor, it still cost the LDS church $85,000. Many workers were paid $1 a day for their labor but ended up giving it back to help build the church.

Inside the building there are many beautiful and interesting things. When on a tour, be sure to notice the music stand in the chapel, the beautiful rails, doors and tables, and the unique baptismal font in the basement. This latter room is really a wonder to see.