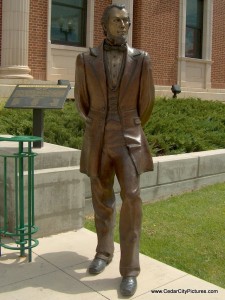 Henry Lunt was born in Wrenbury, England. He immigrated to Utah in 1850. He was the first person named to settle Cedar City and was the president of the company of 36 men and 11 wagons that first arrived here on Tuesday, November 11, 1851, in a blinding snow storm. Henry Lunt twice served as the city’s chief executive officer, in 1952-1853 as president elder and in 1861-1867 when the title had changed to mayor. A farmer, stock grower and merchant, he played a decisive role in all the city’s early pioneering activities including building a stockade, constructing a fort, beginning the manufacturing of iron and helping to establish homes. Henry Lunt exemplified the courage and dedication required of Cedar City’s first settlers.