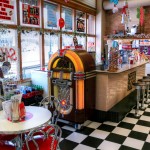 Bulloch Drug has been a downtown anchor store since the 1950s. Many other businesses have come and gone, but Bulloch Drug still is prospering on Cedar City’s main street. The store has changed some over the years. There used to be a full service cafe inside of the drug store. When Don and Sylvia Bulloch came back to Cedar City in 1964 to run the drug store, they took out the cafe and remodeled the building.

In 1996, when Evan and Chris Vickers purchased the drug store from Don and Sylvia they restored the front of the building and added an old-fashioned ice cream soda fountain which has been a big hit with both local customers and tourists. Two of the Vickers’ children, Robbie and Martene (Barker), are also pharmacists and now are both owners and managers in the business. The three other Vickers children have all worked at the drug store while growing up, but now live elsewhere.

Bulloch Drug has undergone a number of remodeling projects over the years while under the Vickers ownership, but they have always strived to maintain the historical nature of the both the building and the business. Through excellent customer and professional service they have been able to build up a very loyal clientele.